Think if you have ever heard/thought the following lines:

“Oh you are an introvert? You must be so shy around people!”

“Introverts are rude and anti-social.”

“Extroverts are so hyper, always partying and going crazy!”

Most of us have some or the other preconceived notions about what introverts and extroverts are like, based on what we seem to hear in popular culture, and from the people around us. Now what if I told you that these ideas couldn’t be farther from reality?

Not all introverts are shy, and not all extroverts love to party.

There. I said it.

Now, after this earth shattering revelation, let’s get down to clearing the nitty-gritties of what extroversion and introversion are actually about.

Introversion vs. Extroversion- The Basics

The concept of introversion and extroversion (although, the correct usage, according to psychological theory is extraversion) was originated from the theories of Carl G. Jung (pronounced: yoong), a Swiss psychiatrist and psychotherapist. He theorised that there are two basic personality types, introverts and extroverts. The primary difference between them lies in where they derive their energy (libido) from.

An introvert’s energy is derived from their inner world. They recharge their energy by spending time with themselves, introspecting about their thoughts and feelings. This preoccupation with their inner world is the very reason why they are often seen by others as “aloof” and “reserved”.

On the other hand, an extrovert’s energy is directed towards the outer world. They recharge by spending time with other people, engaged in activities that provide social stimulation. Their preoccupation with people and interpersonal relationships is what generally fetches them the tag of “outgoing” and “active”.

Now that we have addressed the elephant in the room, let’s move on to the features that form the essential differences between each personality type.

It’s All in the Mind- They are often described as internal processors, as their minds are always on the go. While you may see a quiet and serene surface on the outside, inside there’s a storm brewing. There are a 1000 different things that are ongoing in an introvert’s mind at any given moment- the reason behind their friend’s outburst in the morning, their menu for lunch, the factors that led to the current fiscal crisis, how adorable cats are, the meaning of life…you get the idea!

Think Before They Speak- Introverts don’t believe in speaking their heart out at the first provocation. Thus, the end result you hear from an introvert’s mouth is a product of a lot of forethought, contemplation and introspection.

See More, Know More- If introverts had to be described using a bird, it would be an owl, always seeing and observing, with its big round eyes. Instead of jumping into any activity or conversation, introverts like to observe to get a sense of what is actually going on, and forming their impressions and conclusions about it.

Quality Over Quantity– Contrary to popular belief, introverts do not dislike people. Yet, instead of branding their whole contact list as a “friend”, they choose to form their close bonds with 1 or 2 special favourites. As an extension of this, they are firm supporters of deep, meaningful, one-on-one conversations held over a cup of coffee, preferring them to a group discussion out in a noisy bar or restaurant.

Lists, Notes and Excel Files- While they cannot be termed as boring people, introverts do love them some good ol’ stability. Not ones for ambiguity and unpredictability, last minutes changes in plans or sudden surprises can often throw them off track. Their heart lies in planning, organizing and envisioning, so if you come across hundreds of to-do lists and plans on an introverts phone, don’t be surprised.

Introverts- What It Means For Their Career 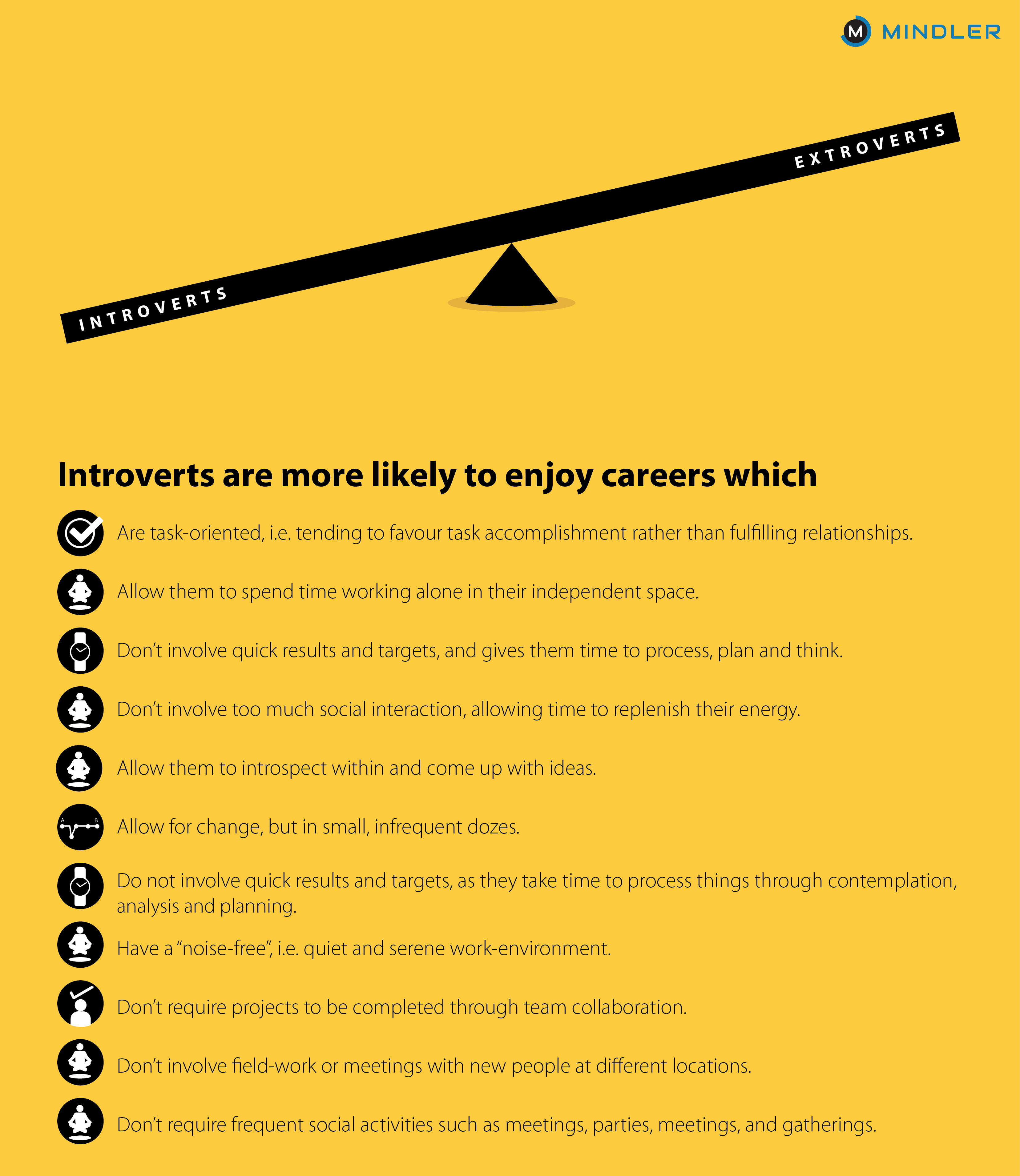 Read More: 6 High-Paying Fields For Those Who Don’t Like To Talk

The Life of the Party- Extroverts

Act, Speak and Then Think– Extroverts are often described as external processors, i.e. they rely on information and stimuli from the external environment while making decisions and coming up with solutions. They are more likely to be a part of the “try before you buy” club, relying on the ability to do and perform things, rather than thinking about them. They also make their best make decisions by verbalising their thoughts and involving others in the thought process.

The World is My Friend – One of the key traits of extroverts is that they are able to draw people out easily and form connections, even with ones they don’t share much in common with. It doesn’t matter if you are of the opposite gender, 10 years older, and hail from another country, an extrovert will be able to strike up a conversation with you, and make you feel like you know each other since ages.

Happiness is Contagious– If you find a person at a social gathering, surrounded by a bunch of people, constantly chattering at loud volumes and using animated hand-gestures, it’s probably an extrovert. Extroverts are well-known for their enthusiasm and spontaneity, and it comes to them naturally. It is hard to hang around with an extrovert and not catch a dose of their infectious excitement.

Please Disturb, Extrovert at Work: If we had to choose a favourite activity for extroverts, meeting new people would have to be among the top of the list. Extroverts love to network and interact with people from different walks of life. This is the very reason an extrovert is most likely to be the one person in the school/college who knows just about everyone.

Social Butterflies- They like to join in and belong, thus they are more likely to be a part of a bunch of groups, clubs and communities, anything that gives them a chance to interact. They feel much more safe in a group, surrounded by people, as the idea of being alone with their own self irks them.

Extroverts- What It Means For Their Career 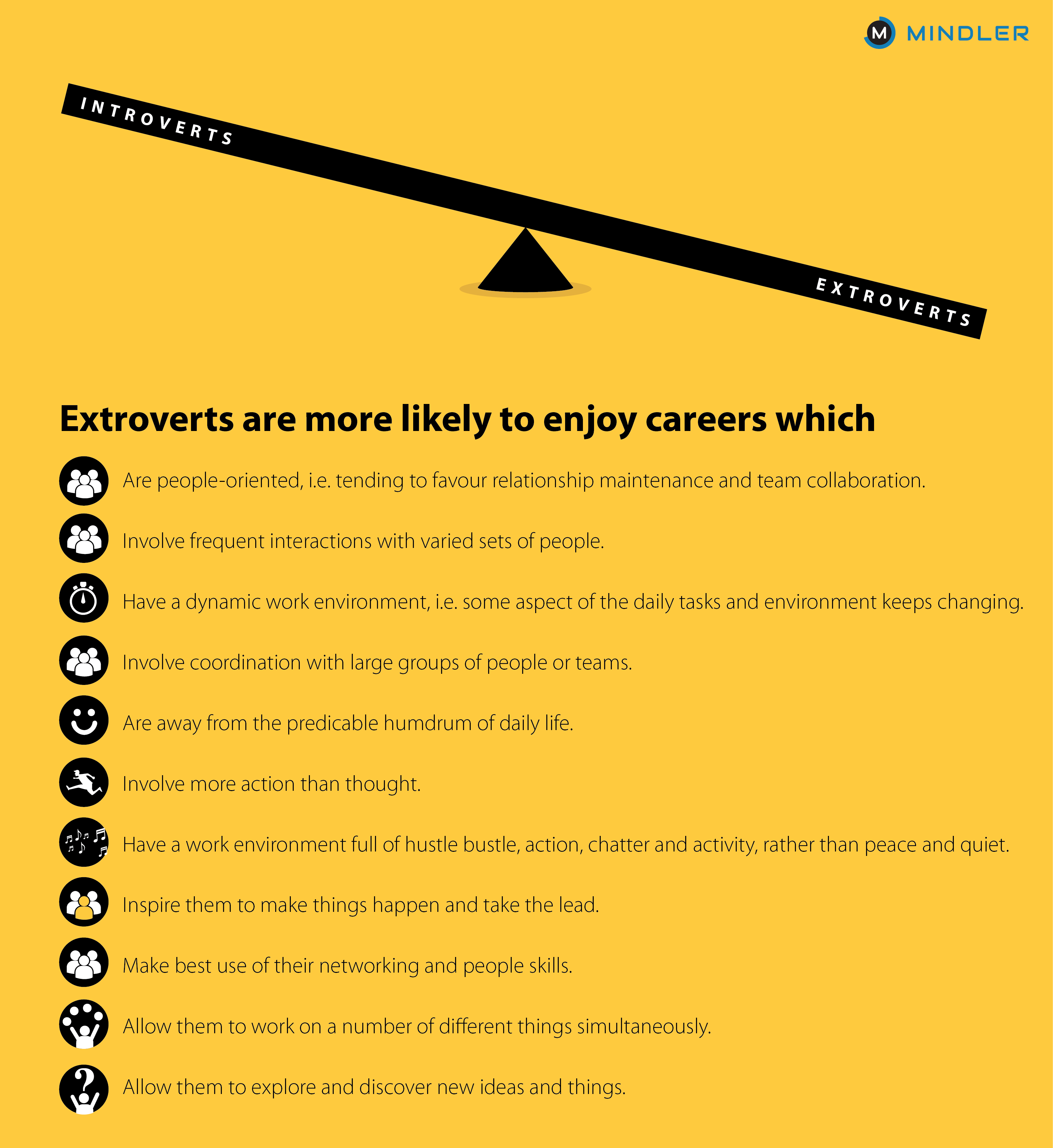 Read More: 13 Careers For Those Who Love To Travel

Introvert or Extrovert? I am an Ambivert!

Although it might seem appealing to classify yourself into neat, set categories of ‘introvert’ or ‘extrovert’, the truth is that there are no ‘pure introverts’ or pure ‘extroverts’, and everyone shares at least some qualities of both. According to current theoretical understanding, introversion and extroversion lie on a continuum, instead of being either/or typologies. In simple terms, it means that all of us lie on the ambiversion scale, with varying degrees of introversion and extroversion qualities. So, as an ambivert, I love social situations and interacting with new and different groups of people. However, too much social stimulation tends to get the better of me, which is the time when I retreat into my “me cocoon” (See: books, coffee and peace).

These facts are not there to discourage you from taking up a career that you might be passionate about. These are general guidelines aligned to your personality that can be of help to you while choosing a career. Keep in mind that there are always aspects of each job one likes and doesn’t like, and certain aspects where one is proficient, others which offer room for improvement.

So are you an extrovert, introvert or ambivert? Share with us in the comments!

0 0 0 0 0
Previous ArticleYour One-And-Only Guide To The Cambridge Board Curriculum
Next ArticleAsk a Career Coach: How Should I Convince My Parents to Let Me Pursue My Dream Career?
Comments (6)