DU declared its first cut-off list this Friday (June 23rd), and the mental state of students since then has been helter skelter. Amongst all the frenzy of checking whether they made it to their target college/course, locking their choice on the DU website, and collecting all documents for the admissions, there is still one essential element that students are still not entirely clear on.

Despite all the information out there from official and unofficial sources, we have so many students coming up to us asking which subjects they should and should not include in their best-of-four score. Considering that it is the most vital part of the admissions process, you need to have a fool-proof understanding of it before you proceed to a college. We are sure you would not want to travel to your chosen college with hopeful eyes, only to be told that you fall short of the cut-off, just because you got your best-of-four calculation wrong.

So read on to get all the clarity you need regarding how to calculate best of four percentage, and grab the course of your choice.

Recommended Read: DU Cut Offs 2017: Choosing the Right College, Course & Everything in Between

While calculating your best-of-four score for science courses, the minimum eligibility criteria is for you to have studied Physics and Chemistry in class 12th. For Biology-based courses, such as Zoology, you need to have Biology too in your class 12th.

Apart from that, the following subjects need to be part of your score calculation:

The 3 science subjects that need to be a part of your best-of-four calculation vary from course-to-course. Here is a list to act as a guide for some of the popular courses:

As opposed to the science courses, mathematics and computer science courses can be pursued by students from any stream; the only requirement for eligibility is for you to have pursued Mathematics in your class 12th. The domain includes courses such as B.Sc (Hons.) in Mathematics, Statistics, Computer Science and B.Sc Mathematical Sciences.

Here are the subjects that need to be a part of your best-of-four calculation for courses in this domain:

Keep in mind that adding a subject to calculate your best-of-four score that is not there in List A (for example, Physical Education) will again lead to a deduction of upto 2.5 percent marks, for each subject not included in the list.

DU offers honours course in many different and interesting humanities subjects. Popular ones include History, Economics, Psychology, Political Science, Journalism, Philosophy, etc. For these and other honours course in humanities, the best-of-four score should include the marks for the following:

The B.A Programme course offered by the Delhi University provides students the opportunity to study a wide range of subjects in the humanities stream, and choose their major and minor. The university has made it mandatory to include the following subjects in the best-of-four score for a B.A programme course:

Delhi University also offers a range of courses in various languages, both Indian and Foreign. Apart from the much-opted for B.A (Hons.) in English and Hindi, the university also teaches other language courses, such as B.A (Hons.) in Sanskrit, Arabic, Persian, Punjabi, Urdu, Bengali, French, German, etc.

The best-of-four score can be calculated by including the following subjects: 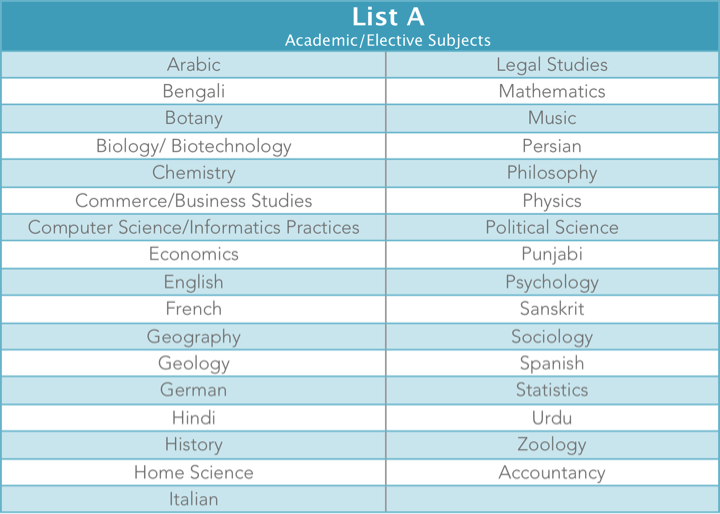 The two merit-based commerce courses offered by Delhi University, B.Com (Hons.) and B.Com Programme, are some of the most sought-after courses in the University.

The university has radically modified its calculation for these courses this year.

In a way, they have tried to benefit students from commerce stream, by applying deductions and thus preventing Science and Humanities students from readily grabbing seats in these courses.

The following are the subjects to be included for calculation for Commerce students:

The University has also provided an alternative method of calculation, in which the following subjects need to be included:

One important rule for students from boards other than CBSE

For science subjects, in the boards where theory and practical marks are not in the 70% theory and 30% practical format of the CBSE, they need to be converted proportionately.

DU has provided the term “pro rata”, which makes it seem very complicated, but is actually quite easy if you understand the concept. Here’s how to do the calculation:

For example: In a board where Physics marks are divided in the following manner:

So if a person scored 50 out of 60 on theory, and 40 out of 40 on practical, you need to calculate the “pro rata” score through the following calculation:

There, not so difficult now, is it?

0 0 0 0 0
Previous ArticleDU Cut Offs 2017: Choosing the Right College, Course & Everything in Between
Next ArticleAdmissions 2019: List of Universities Offering Sports Quota in India
Comments (7)